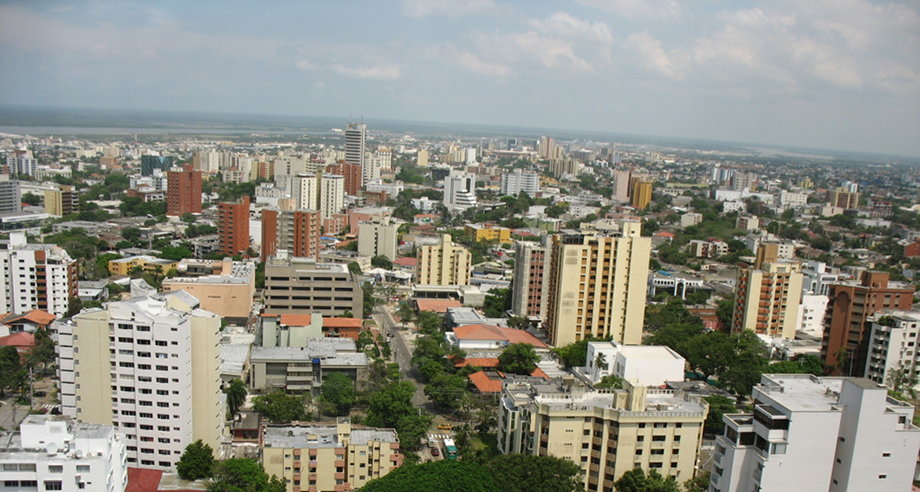 View from the balcony (14th floor) of Edificio Palmeiras

The most attractive city to live, enjoy, work and rest


Barranquilla, the main city of the Colombian Caribbean region is the fourth largest city in Colombia, after Bogotá (9 million people), Medellin (4 million) and Cali (3 million). This beautiful tropical city, whose metropolitan area is home to about 2 million people, is bordered by the Magdalena river and the Caribbean sea.

Due to its geographical location close to The Equator Barranquilla has a warm climate all year round, with temperatures between 28 and 35 degrees Celsius. There are also some rainy seasons between May and November.

As if all this were not enough Barranquilla is 2 and a half hours (by air) from Miami, and an hour and a half (by land) from the top two resort towns of the Colombian Caribbean coast, internationally recognized for their beautiful scenery, beaches and well-preserved historic districts among other attributes: Santa Marta and Cartagena. It should be noted that the price per square meter built in Barranquilla is less than the price in these two cities, while the finishes are of equal or better quality. For these reasons and others, Barranquilla has been called "the city of the future for Latin America."

In recent years, foreign investment in Barranquilla has grown at a significant pace. Barranquilla is becoming the corporate headquarters of Colombia, and in 2012 was ranked #28 among Latin American cities in attracting investments. Colombia has free trade agreements with several countries among which are: United States (2012), Canada (2011), Switzerland (2011), Chile, Andean Community of Nations or CAN (Peru, Ecuador and Bolivia), Mexico, Mercosur (Argentina, Brazil, Paraguay and Uruguay), the North Triangle (El Salvador, Honduras and Guatemala). Additionally, the Colombian government is conducting negotiations with their counterparts in the European Union, Norway, Iceland, Liechtenstein, Korea, Panama and Turkey.

Let yourself be enchanted by this great city and its wonderful people!

The Golden Gate of Colombia

The most important holiday in Colombia, which attracts more than 1 million people each year to Barranquilla

This beauty is just two hours away from Barranquilla

This beauty is only 1 ½ hours away from Barranquilla